Agdangan: The little town that will


As Philippine municipalities go, Agdangan in Quezon Province is relatively small with an area of just a little over 30 square kilometers and a population of only 12,851 (2015 census). For comparison, nearby Atimonan has an area of nearly 240 square kilometers with a population of 63,432. This is one of the reasons cited by Agdangan Mayor Adam Aguilar why his town has been underdeveloped – skipped over by the province’s political leaders for its feeble voting power – for so many years.

Pockets of road and bridge repairs compounded the fatiguing five-and-a-half-hour road trip from Quezon City to Agdangan. Mayor Aguilar and Tambuyog Executive Director Dinna Umengan, along with their staff, were already patiently waiting for us by the time we arrived at about 10:30 am. Looking back, maybe we should have planned to leave earlier than 5 am.

A 5th class municipality, the Agdangan townsfolk subsist on
coconut farming and mostly fishing – typical sources of livelihood for coastal communities, especially in the southeastern provinces of Luzon.

For most of the town’s fisherfolk, the volume of their catch today is a far cry from before. The current average fishing yield is only about three kilos per trip, which barely covers fuel and other operating expenses. They know that the breeding grounds must recover, and they have established two fish sanctuaries for this purpose. Also, the LGU is planning to close the municipality’s waters against fishing to give marine organisms a chance to reach maturity and multiply. 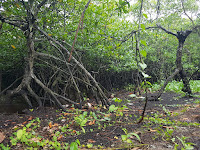 Two challenges have been confronting the town’s efforts at conservation. First, and until recently, both the mangrove and the reef ecosystems were threatened by human activities. Poachers, mostly from neighboring municipalities, have not only been fishing where they were not supposed to, but they have also been using illegal methods such as Danish seine (buli-buli, banned since 2014), dynamite fishing, and cyanide. Moreover, people were dumping trash in the mangroves and cutting trees indiscriminately for household construction. Ms. Umengan tells of a former mayor
whom Tambuyog took to court some years ago for clearing 15 hectares of mangrove, which he subsequently used for aquaculture. The case is yet to be resolved.

Fortunately, strict enforcement instituted in the last several years has increasingly become a major deterrent in these activities. According to Sonny Hermoso, Agdangan Tourism Officer, the Bantay Dagat (Fish Wardens) together with the Philippine National Police have been very effective in getting errant people in line.

The second issue is livelihood. With the planned seasonal closure of municipal waters to fishing, the community must look for other ways for their fisherfolk to put food on the table. Tourism is being eyed.

Last year, the community had a proposal for Seacology. They will strengthen the protection of the 24-hectare Bahurang Silag and the 98-hectare Lawis sanctuaries, both existing no-take zones in the municipality’s waters, and they will also set aside for conservation 50 hectares of mangroves in Barangay Kanlurang Calutan, in return
for funds to build a 400-meter mangrove boardwalk and information center. This is to boost their fledgling tourism industry, and Seacology agreed.

After the initial briefing from Mayor Aguilar and Ms. Umengan, we headed to what is now known as Camp Multohan Mangrove Walk and Information Center, about 15 minutes by car from the municipal hall.

For Tagalog speakers, which the Agdanganons are, multohan means haunted. As in ghost-haunted. But despite whatever Halloween-inspired images it may conjure, the name does not refer to the presence of disembodied spirits. It is simply the name of the sitio where the boardwalk is, the origin of which no one seems to know anymore. At any rate, this didn’t seem to bother the laughing coterie of locals we passed by at the middle of the boardwalk. 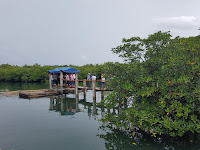 Their excitement to show us how and where they did what was evident. This was where they mixed cement. This is one of the rafts they used to haul the materials, and they used many like that. This 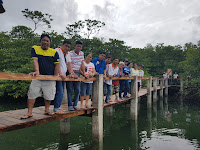 was where the materials were piled. This is how the foundations were constructed. And so on. What was evident too was their pride in what they were able to do together.

The second, shorter part of the boardwalk starts at the western end of the small island. The boardwalk splits into two towards the end. One leads to a covered dock where one of the rafts used for hauling construction materials is tied, and the other looks like it can be used as a jump-off point for other marine activities. Both offer a view of the sea, and the buoys marking the fish sanctuaries can just barely be seen as tiny white dots from afar. 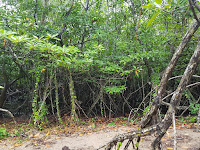 Part of the itinerary was for us to go to the fish sanctuaries by boat, but an unseasonal prolonged rain put a dampener on that. Instead we huddled in the covered part of the dock with everyone engaging in light banter.

Perhaps because it is a small town, Agdangan seems very progressive. They have no landfill and other municipalities will not accept their trash, so recycling is strictly enforced. Plastic bags, even in the wet market, are prohibited. Signs warning of fines for litterbugs are there not just for show unlike in many other places.

Violators are really apprehended and fined. Community members themselves report the violators. It was only when they told me this that I realized I didn’t see a single piece of trash as we went through the boardwalk. And I got the chance to validate this on the way back.

Mr. Hermoso says they plan to conduct educational tours for schoolchildren on the boardwalk and involve them in mangrove planting. With the next generation getting involved, there certainly seems to be reason to hope in Agdangan’s future.

Posted by Ferdie Marcelo at 7:42 PM No comments: